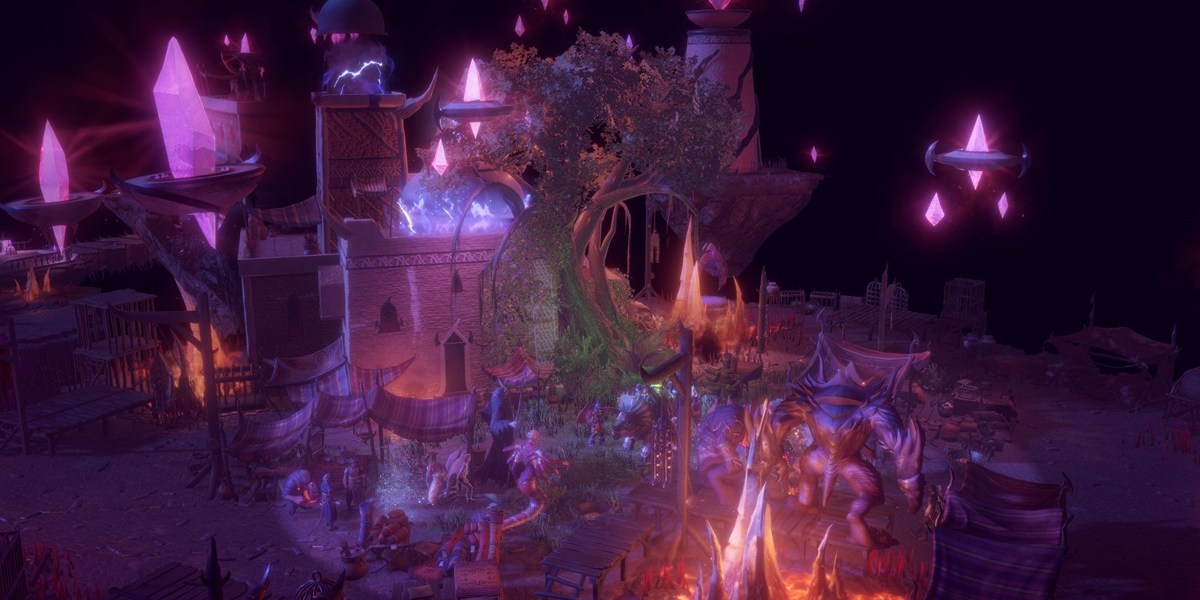 Where’s My Dragon is an Azara Mythic Quest in Pathfinder: Wrath of the Righteous. While you do receive it in Act 4, it also follows that you’ve at least completed the previous missions, such as Above the Clouds. The objective here is fairly important, as it can affect other predicaments, too. Here’s our Pathfinder: Wrath of the Righteous Where’s My Dragon guide for this Azata Mythic Quest, as well as a key instance for the Devil Mythic Path with Mephistopheles.

Note: For more information, check out our Pathfinder: Wrath of the Righteous guides and features hub. Likewise, please be reminded that this guide contains spoilers.

You’ll get the Where’s My Dragon quest in Pathfinder: Wrath of the Righteous while exploring Alushynirra. Specifically, after you’ve visited the Fleshmarkets in the Middle City and pass through the yard, Aivu will get kidnapped by demons. Now, you’ll have to find where your little buddy got taken.

Early Sunset then shows up in the Nexus cave, and he tells you that he’s got an idea. Be forewarned that proceeding with the quest can cause drastic outcomes, so it’s best to avoid this until later. Ideally, you’ll want to finish the other tasks in the Fleshmarkets, such as buying off the slavers to rescue Suture, as well as talking to Wirlong Black Mask to help you recruit Trever. Additionally, you might want to buy a bunch of items from the vendors in the area. First, it’s possible to make Fleshmarket NPCs hostile to you depending on your dialogue choices. This lets you attack and kill them one by one. Alternatively, if you didn’t do any of that, then you might be in for a tough battle ahead. In any case, tell Early Sunset that you’re ready to proceed with the Where’s My Dragon quest in Pathfinder: Wrath of the Righteous.

Go to the Fleshmarkets, whereupon you’ll see him roam around while disguised. There are several skill checks here: Perception -> Perception/Stealth -> Arcana. Eventually, you’ll learn that Aivu is being held inside Shed-Skin’s quarters, which is the building next to the Marilith NPC. 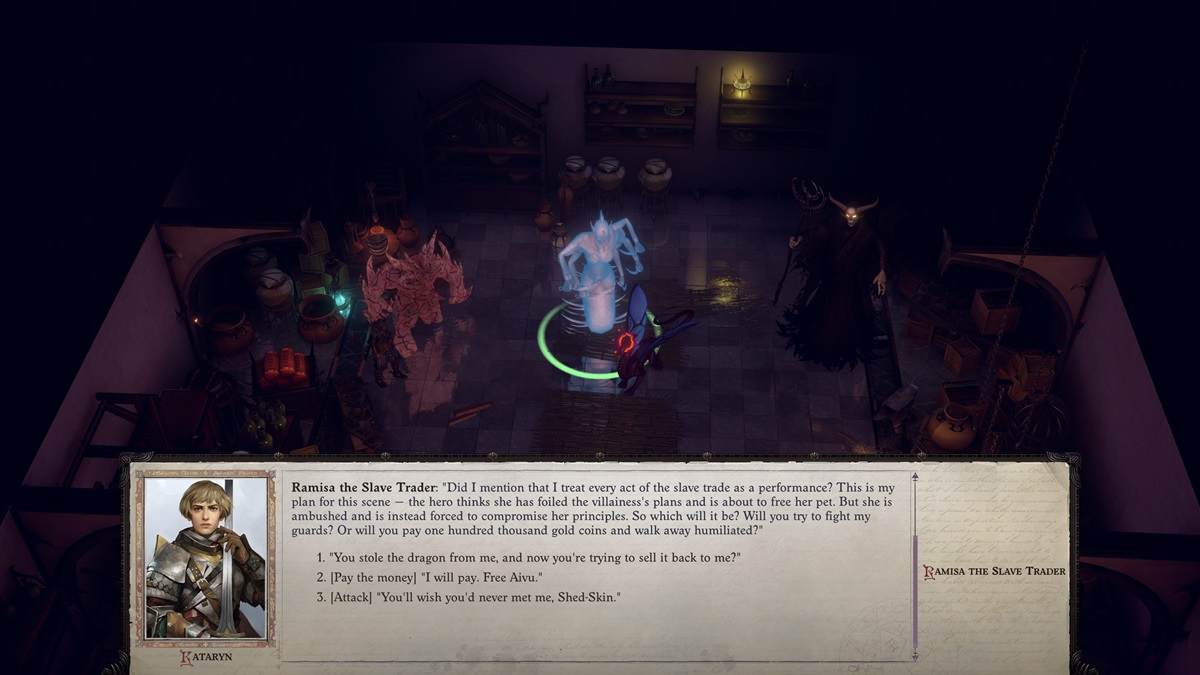 Inside, you have to choose how to handle the situation:

If you opt to duke it out with the slavers, then you’ll have to fight everyone that you didn’t take out initially. This includes Sarzaksys, Wirlong Black Mask, and more. This is an extremely tough battle due to all the enemies you’ll face, though you can get an Azata buff by causing the flowers to bloom or singing the Song of Elysium. Whether you left in peace or you killed everyone, you’ll complete the Where’s My Dragon quest in Pathfinder: Wrath of the Righteous. However, something still seems amiss. It’s as though Early Sunset might be lying to you. It’s then revealed that your advisor is none other than Mephistopheles, and he’ll attempt you with new powers: 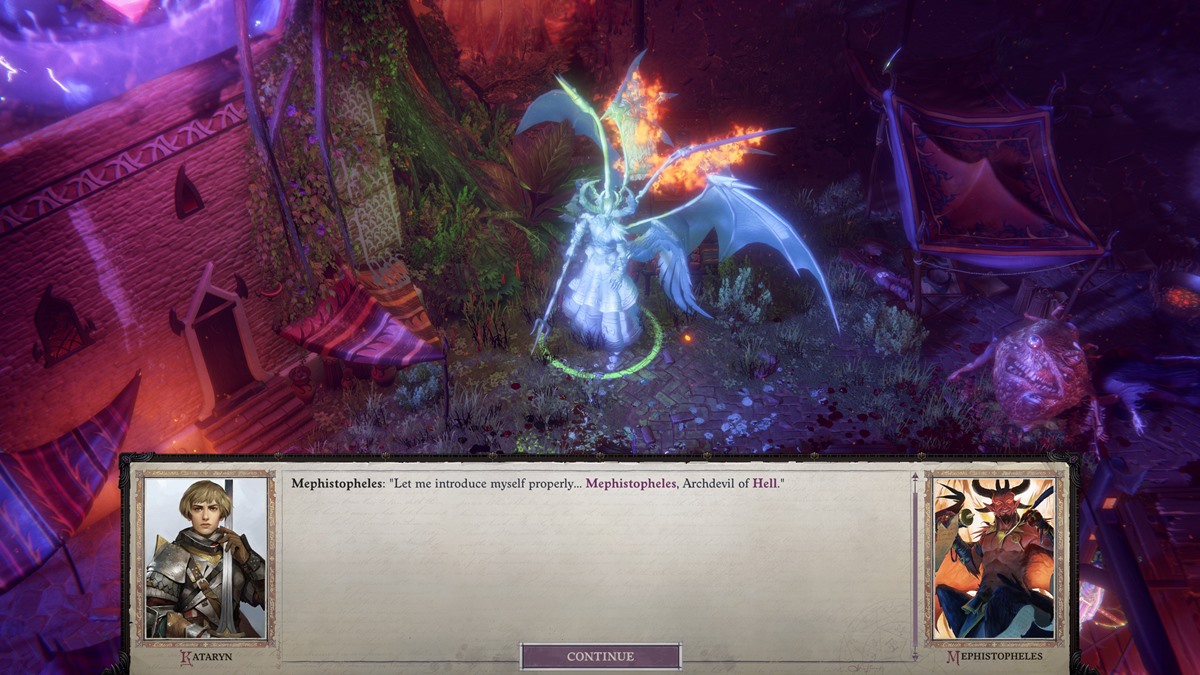 Pathfinder: Wrath of the Righteous is available via Steam.